one of my favorite indie games to date, thank you so much!

and heres the new prequel

I feel like with enough support it can be on console! Plus the game has a PS2/PS1 art style, that is common for most indie horror games.

Heyy 2 months later, here is floor 3 and 4 with the first Golden Meat

Here is a quick level 1-3 No Commentary

I have had this game on steam since it came out and I still cant get to level 4 lmao :)

Why do i get stuck in the elevator every time i play the demo?

that happens to me too.

This game is really something, I'm intrigued about the concept of this game, It has a really interesting story and I'm so hooked how it ended. I can't wait to play the full game.

Awesome Demo! Here is my video on it!

Good game, I haven't been able to fully enjoy it because it failed me when I got into the elevator, but I plan to play it again. Good luck.

I also had a bug with the elevator. Got stuck in the bright descending state

An interesting demo. Waiting for the full release.

Full release is already on Steam!

Wow !!! I played the demo and it's great! I love horror and the Rougelike. Any chance of it reaching GOG?

Not sure a bout GOG, but it's already up there on steam!

Hey, the game is cool! But I have one complaint. When I die, the game soft-locks always and I have to force start. Is this a common glitch? Happens to me all the time so far.

Hhi there! It will be fixed in a few hours

Thanks for support man! I found this game so difficult, I could barely get through the first level. But the rogue genre is my go-to and I loved the weird theme in this game so I would probably get it on steam the full version (: Looking forward.

What a cool game. I thoroughly enjoyed it and have played more after I did my video. It has Binding of Isaac vibes but is honestly pretty creepy at times. I played it for my Bloodcurdling Barrage in which I post a new video every day of October. This is probably the one game I'm thinking about having on the channel more just because of how fun it is to play. There are some slight video issues in my video (the static square on the screen) but that's my fault, not yours.

Are there obnoxious jump scares in this?

There are only somewhat scary monsters that you can kill

This game is something else haha you are definitely taking a trip into a world your brain may not even handle. Props to the Devs for creating a game that sets itself apart from what ya typically see. I'm not gonna lie, the monsters and fleshy growth left me disturbed and kind of disgusted, so great job on that haha

Hey thanks for playing this!

Will the full Version be on itch.io as well or will it only be avaliable with the Steam DRM? I would appreciate an answer thanks :).

Hi there! We didn't plan for releasing the full game here. It will be on Steam and later on Switch (probably)

You should release it on itch too, why not!

good game i have some ideas for this! :

3-less smoke when you hit a enemy

13-custom weapons (you can make these in the "craft table)

and these are my ideas but the game gonna be free? i will be waiting for an answer

Hi there! Game will be $13 on Steam's early access

wait but it will only cost money in early access?

Yes, demo will stay free. And the full version will cost $13 on Steam

Cops will get you than!

What the heck are these public build names

This one was definitely more forgiving with the items and map and it still kept the creepy factor! thanks for the recommendation!

It's amazing, I love the idea of being able to fight back in a horror game    Can't wait for the full release ;)

I come from part of the Streamer NicoCore

Did he played it?

A very strange and interesting roguelike, I'd describe it as "Silent Hill meets Condemned, with 200% more meat and enough mimics to give a DnD player PTSD flashbacks".  I especially like how weird and twisted the enemy and gun designs can be, such as a triple-fire shotgun made of 3 of them welded together with meat and the Cringe (a.k.a. the deadly wailing doorframe). The "friendly" meats are no less messed up too, poor Huggs took a lot of accidental hits due to surprising me around a corner or being near a mimic when I attacked it.

Between the low-fi graphics, the freaky enemy designs and the constant feeling of being unsafe and stalked by monstrosities, this game gets genuinely tense and scary at points without resorting to hardcoded jumpscares.1 Before you know the signs of a nearby mimic, having them attack out of nowhere is genuinely terrifying, and even once you know what to look and listen for, they'll still get you by sneaking up behind you or hiding among cluttered areas that make it hard to pick them out. I especially panicked whenever grabbing the last key for a floor, since that always was followed by every unkilled mimic going active (complete with a chorus of the moaning and crunching noises they make when coming out of hiding state) and swarming to stop me before I could reach the elevator.

The non-mimics were thoroughly spooky too, from a murderous pair of legs, to a floating meatwad that charges all over, to an eyeball chandeleir/crusher combo. I figured SH had grabbed up all the interesting meat monster designs there were, but each new meat critter surprised me with how messed up and dangerous it was. Mr. Pants was the bane of every run he showed up in, the persistent little jerk.

This is an excellent roguelike, and I'm looking forward to seeing how it evolves over time. I started playing just before the memento-picking update, so just that was already a nice improvement, and I like the hud placement changes and Field additions that keep appearing with each update.

Just curious, now that I've beaten Castle and reclaimed Her Head, is there anywhere else to go, or are any other completeable objectives like getting Son his refreshment implemented yet? I'm assuming this is it, since this is a very early demo version, but it'd be nice to know if there's anything else left to do.

I really liked just how much scarier Castle was than the usual monsters. Immensely tall, horrifying appearance even by meat standards, doesn't hide, has a blade arm, and is willing to chase you forever unless you find a hiding spot like the exit "elevator" with the note. I also noticed that once I found a triple shotgun and started taking big chunks of his health with it, he started running away instead of idling or chasing, which made it really satisfying to finally track down, corner and end him.

Also, not sure if it's a glitch or intentional, but as soon as I put Her Head on the black poles, my view was filled with light like it would be during spawning into a floor, but it stayed permanently even though I could still move and interact. It stayed like this until I save and quit then rebooted the game, where I'd respawn in the field just before putting Her Head on the pole, and it would happen again if I redid it. I'm guessing that's the "congrats, you beat the demo" indication, but I figured I'd say something just in case it wasn't.

found this game on gamejolt then it went away after i downloaded it but it's really good! You got the creepy feeling down and the eerie factor as well plus i never expected where a monster was coming from. Great job!

Hey thanks for the video, great fun! I would love to watch another few episodes of this on your channel. Update your build by the way, version 5.20 is more forgiving :)

Loved the spin on prop hunt. Definitely looking forward to early access on steam to see what else is in store for this game.

any plans for a Linux or Mac OS release? this game is literal horror perfection and I would buy your entire stock if you launch this game for Linux

Hey thanks! If the game ever will get big enough, Linux and Mac versions might come to life

Absolutely loved this game. I love rogue-like games and horror games and this one just does everything right. I actually found a bug with one of the keys so I made a video on the game. Here it is if you wanna see it. Hope this helps but nonetheless it's an amazing game!

Hi there! That wasn't actually a bug haha

I like it, even if I'm shit at handling jumpscares and as such can barely play it XD

I LOVE this game

as the download reached 90 it stopped, when i tried to refresh it it wasnt there , saw a new update just rn wow, nice timing

its fine bro, first time it happened with me in the middle of download new update, and great game, its a lot scary man, i cant only play it at day time

Have you ever thought, "Hey, I wish Gmod's prop hunt, Silent Hill 4, Shadows of the Damned, and Resident Evil 4 could all be combined into a roguelite FPS"?

No? Well that's probably because you're a mentally healthy human being, the developers of this game are off their meds but the end result is pretty cool tbh. All of the disparate influences come together to make a very charming dark comedy game that manages to bring the spooks and feel very good to play. I only wish it would be localized to English a little better.

We're proofreading the text little by little, but yea, we're devs froms Russia without our meds so you know haha 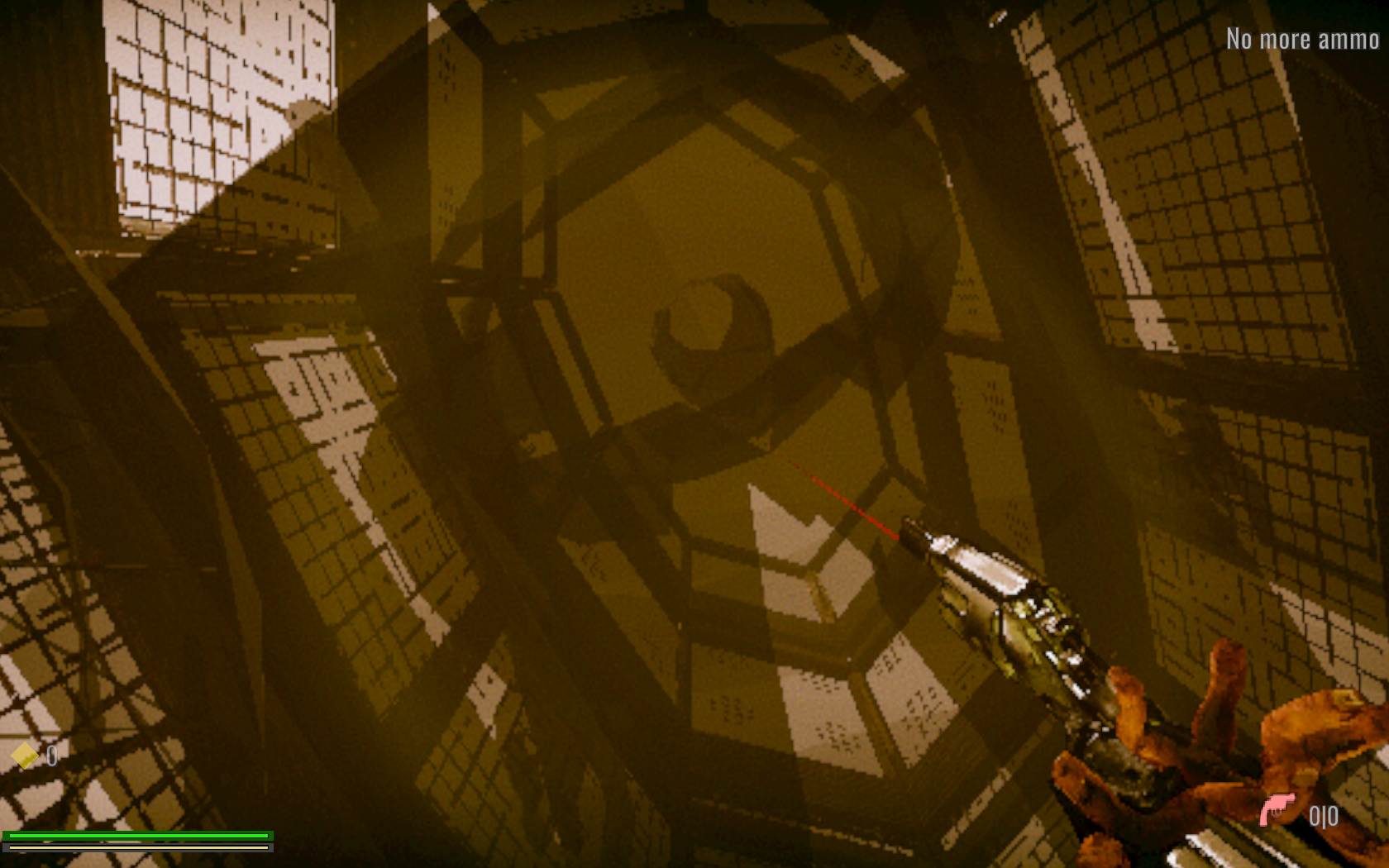 this game is awesome but can you add lower settings cuz im playing on bad laptop :|

Hi there! I just made a bit of optimization for this game so it should run much smoother now!